How to reinvent an essential, nearly century-old product

Wife and husband Samantha Rudolph and Jared Miller of Babyation, a firm born in Branford, Conn., now headquartered in St. Louis, had the sort of brainstorm serial entrepreneurs have while vacationing in Vermont. She was reading a New York Times blog about a clunky, noisy, inelegant but absolutely necessary product essentially unchanged for nearly a century.

Somewhere between three to more than five million, depending on the source, of these items are sold annually in the U.S. alone. And users, many highly productive members of the workforce, need this item so badly they will pay up to $400 for a higher-end model.

She is an experienced business development and strategic planning expert who worked for ESPN for more than eight years, he an electronics wizard who can and has built almost anything, even supervising the commentary center for the Olympics for 14 years. They asked themselves, “Why can’t this truly essential product be as smart and functional as a smartphone, quiet as a luxury car? Wouldn’t that sell? Why can’t women have an improved version of something so badly needed to juggle work and family?”

On the drive back to Connecticut, Rudolph says her husband the engineer reeled off ideas which she furiously typed into her phone. And thus was the germ of Babyation born.

What is it? A breast pump, essential to increasing numbers of working mothers. Today’s pump is essentially the same sort of milking device used on cows, invented by an engineer in the early 1920s and last re-invented in the late 1940s by a Swedish mechanical engineer. 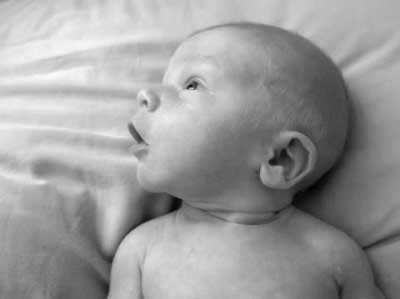 Babyation’s patent-pending device is quiet and discreet, allowing a mother to pump anywhere inconspicuously, even in a meeting. It also uses an app on an ordinary cell phone allowing the mother to control the pumping rate and track various metrics. The product release is scheduled for later in 2016.

Both demographics and public policy are on their side: 77 percent of new mothers pump, according to the Centers for Disease Control and Prevention’s 2013 Breastfeeding Report Card. And a crucial provision of the Affordable Care Act requires that insurance companies cover lactation services, a pump being the most obvious purchase.

So the couple applied for a $50,000 Arch Grants grant, which requires that recipient entrepreneurs be located in or be willing to relocate to St. Louis, and the couple flew to the Gateway City to present their brainstorm.

“Jared got on the plane and said, ‘No way I’m moving there!’ says Rudolph from St. Louis, her hometown. “But we were so taken with the St. Louis entrepreneurial community, the whole ecosystem, that on the plane back to LaGuardia, he turns to me and says, ‘You know this is the place for us.’ ”

They and entrepreneurs from Chicago, New York, Miami, Seoul and Barcelona won the grant, all of whom think St. Louis is the place for them. Babyation has since found a home in the T-REX incubator in downtown St. Louis, also home to the St. Louis Small Business and Technology Development Center (SBTDC).

Meanwhile, the St. Louis SBTDC, part of a statewide SBTDC network, a lead program of the University of Missouri Extension Business Development Program, was hosting an InnovateHER: Innovating for Women Business Challenge and Summit competition. This is a national prize competition sponsored by the U.S. Small Business Administration which seeks to identify and commercialize products and services that impact and empower the lives of women and families.

“The workforce here in St. Louis and nationally looks very different than just a generation or two ago,” she says. “Women now make up nearly half the workforce in Missouri, and nationwide about 70 percent of working women have children under the age of 18. Many of these women are increasingly caring for aging parents while trying to balance the needs of work and kids, too. Clearly, there is a very real need for better products and services to address these issues, and this competition provided the means to do so.”

Watson explained the services and capabilities of the MO STBDC and BDP to the couple, enrolling the firm as a client. She also offered advice on how to pitch the new pump to judges.

It worked. Babyation is one of only a handful of firms selected as finalists for the InnovateHER challenge to be held in Washington, D.C. in March. Finalists will compete for three cash prizes totaling $70,000 courtesy of Microsoft Corporation.

“They just made a very convincing and professional presentation,” says Watson. “We believe Babyation has the best potential to represent us in Washington, D.C.” 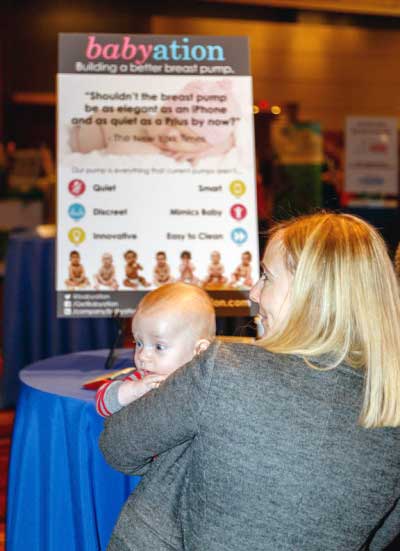 Babyation’s CBO and CEO at a trade show

Rudolph, who has been back in St. Louis about two months now, says she can’t imagine starting a business anywhere else.

“I am stunned, just blown away, by how willing everyone is to help us,” she says. “You have to almost pay people to make introductions there [on the East Coast]. Everyone here is so friendly, so willing to help, so invested in your success personally and professionally. Lynnette and the MO SBTDC were incredibly supportive, and we’re very grateful for their belief in us and our product.

“Any way you slice it, St. Louis is the place for us.”

Babyation, the innovative breast pump maker we profiled in January 2016, announced in late March 2016 that it had surpassed its Kickstarter fundraising goal and plans to ship its product by March 2017.

The wife and husband duo of Samantha Rudolph and Jared Miller said they had raised $81,045 on Kickstarter in just 30 days, easily blowing past their $50,000 goal. Production could begin within six months.

The pump is available for presale from the firm’s website. In an interview, Rudolph said the couple intends to manufacture the pump in the U.S.:  “Our goal is to go as close to St. Louis as possible,” she said.

Babyation was founded in Connecticut, but the couple moved to St. Louis after winning a $50,000 Arch Grant.

This article was first published on January 8, 2016.