Josh Holstein, founder and CEO of CellARide in Springfield, Missouri, isn’t sure what he’ll be for Halloween this year.

But he knows what his eight-year-old son Hayden will be. President of the United States.

That’s thinking outside the box. And that’s what his dad did, too, creating CellARide based on a great idea, a degree in computer science and a diverse background that includes five years with the Springfield Police Department and in sales. 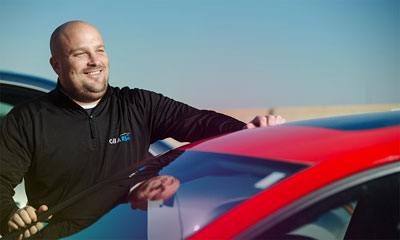 Josh Holstein, founder and CEO of CellARide in Springfield, Missouri.

But first, about CellARide. CellARide began six years ago when Holstein came across a vehicle with the age-old, all-too familiar for sale sign in a window.

“Someone had written a novel on this car for sale, and I thought, ‘There has to be a better, more efficient way to get that information out there!’ ” he says.

Why not use text messaging? he thought. Texting has been almost universally embraced and everyone knows how to use it. Texting is also far more comfortable and convenient than dealing with unpredictable, perhaps unavailable used car owners. And — taking this concept one step further — texting the volumes of information inherent in every car purchase directly to the shopper allows them to skip a sometimes uncomfortable dealer experience.

Holstein then met the founder of Columbia’s CARFAX, Ewin Barnett III, who immediately saw the product’s potential for automotive dealerships and joined Holstein as an adviser and investor.

So have firms you’d associate with a product like this, such as Springfield-based Bass Pro Shops (boats, ATVs), Clayton-based Enterprise Rent-A-Car, Honda, Toyota and other automotive manufacturers and dealers.

And firms not associated with internal combustion, too, such as the giant media firm Gannett; Fenton-based Maritz, that designs and operates employee, sales and customer recognition and reward programs; and Thomson Reuters Corporation, perhaps the world’s largest mass media and information firm, headquartered in Manhattan.

Holstein traveled to Manhattan in September 2016 as part of the St. Louis Startup Roadshow, a cadre of innovative startups that presented to Fortune 500 innovation executives, venture capital firms, independent investors and the media. (CellARide maintains an office in the T-REX coworking space and technology incubator in downtown St. Louis.)

“And they were impressed, just blown away by the possibilities of our tech as a platform,” he says of his presentation — so much so that he is gearing up to present to Thomson Reuters’s global innovation team.

“Yes. We are an outside the box firm for them,” Holstein says. “They are not used to an auto product. But when it comes to shopper insights, capturing leads which can evolve into other insights and a data capture platform — well, that could be very valuable to a company like Thomson Reuters.”

Which was Holstein’s plan all along. 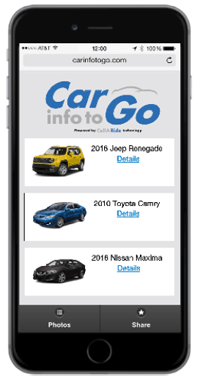 CellARide now has six employees. Being one of the first startups in Missouri State University’s buzzing eFactory with access to business resources and experts like the MSU Small Business and Technology Development Center's (SBTDC) Isabel Eisenhauer also hasn’t hurt.

“I just didn’t understand the path to startup,” he says. “You don’t think of Springfield as a startup hub, but being in this space (the eFactory), having access to all these resources, has just been tremendous.

“There’s a huge difference between being a startup and a small business. And over time, you are able to sit down with people like Isabel and say, ‘Here’s my challenge, how do I get funding?’ She led me through a business plan approach to funding,” such as the September startup tour.

Holstein says he also quickly realized no bank would fund him. They would ask what his assets were; the answer was — him. Eisenhaeur and the MO SBTDC also helped Holstein understand the vagaries of investors, the form of business best for him and other issues.

Meanwhile, Holstein is giving back by being a mentor to other Springfield-area startups.

Congratulations to CellARide on becoming a national supplier to Toyota Motor Sales. Read their news release about the Toyota partnership. The Springfield, Missouri, firm, which is revolutionizing the vehicle shopping experience using simple text technology, also finalized an agreement with Saatchi and Saatchi LA to provide their texting technology at Toyota national events.

This article was originally published on October 17, 2016.