And now he’s running a multimillion dollar business with double-digit weekly growth that has expanded from mid-Missouri to St. Louis and soon Dallas with the help of the Business Development Program (BDP).

He and his brother Jabbok, co-founders of the contractor equipment sharing firm EquipmentShare.com, were raised and educated in a faith-based community near Fulton, Missouri. Its members work and contribute their earnings back to the community, and all share in the proceeds from business ventures — in the case of the Schlacks brothers, starting a construction company within the community, which gave them a solid business foundation and work ethic. 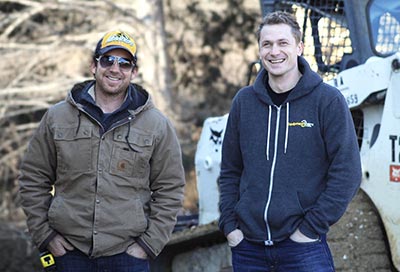 Jabbok and William Schlacks, co-founders of EquipmentShare.com, the Airbnb of construction equipment.

The brothers left the community with their families in 2010 and started Schlacks Construction, which they grew from a small firm in Fulton to a statewide one, also with some BDP assistance, especially that of the Missouri Procurement Technical Assistance Centers (MO PTAC). PTAC’s mission is to aid businesses obtain federal, state and local government contracts.

Their communal background must have stuck with them, however. The brothers looked at contractors’ constant need for often exorbitantly expensive equipment, which can then sit unused during the off-season, and thought — why not share?

This was the genesis of EquipmentShare.com. Think of it as the Airbnb of construction equipment.

The brothers approached BDP partner Regional Economic Development Inc., who share a working space with the University of Missouri Small Business and Technology Development Center (SBTDC), another BDP program. There they met counselor Collin Bunch, who pushed them to better target their customer base and clarify their revenue model. Bunch also introduced the brothers to Bill Turpin, CEO of the Missouri Innovation Center, which also helps grow mid-Missouri businesses. Other MU SBTDC staff later used GIS to better target clientele, especially in the Sunbelt, where there is no true construction off-season.

“Collin was very helpful,” says Schlacks. “His efforts, his networking, have been very valuable.”

The brothers also attended a boot camp that the MU SBTDC organized, and took their very bright idea to the annual Columbia Startup Weekend, which they then won. There they met two developers who provided the tech savvy behind EquipmentShare.com. The two developers became co-founders.

The EquipmentShare.com website streamlines the selection and rental process.

It gets even better: After winning Startup Weekend, the brothers applied and were accepted to startup seed funder Y Combinator, the Harvard of Silicon Valley. Y Combinator has funded more than 700 startups with a combined value of over $30 billion, according to the organization, including such now-household names as reddit, Dropbox and Airbnb.

“We flew out and had a 10-minute interview,” Schlacks says. “And we thought, ‘How in the world can they make a decision in 10 minutes?'” The Y Combinator screeners knew a good thing when they saw it, though, and invested $120,000 in the concept.

Other investors have since recognized the need EquipmentShare.com fills and have invested more than $2 million.

The firm has grown exponentially from just the brothers to the additional co-founders and 20 employees, with a Dallas office expected to open this fall. And this is just the beginning. Schlacks sees enormous possibilities in new equipment sales, insurance and maintenance.

But not just yet.

“This market (contractor rental) we are jumping into is so massive — the equipment alone could keep us busy for several decades!” Schlacks says. “We are moving so quickly, growing so quickly.” How quickly? “About 10 percent every week.

“We feel we are filling a huge need for contractors,” he says. “That’s really the key to our growth.”

The idea behind EquipmentShare.com is simple: Connect contractor equipment owners not using often very expensive equipment with contractors who need it.

To do so, EquipmentShare.com has built a robust website that carefully vets every renter and covers all paperwork, insurance and logistics, including transportation — even, when required, overnight delivery so a contractor has absolutely zero downtime. The firm also inspects and guarantees each piece of equipment delivered. Once in the EquipmentShare system, almost any piece of equipment can be rented with a simple phone call, email, even text message.

For further peace of mind, EquipmentShare.com uses telematics. This is almost any system which merges telecommunications and infomatics, ubiquitous today from phone GPS and navigation to the exact, real-time location of a city bus or package. Customers are thus able to track the location and use of their equipment in real time.

“Telematics is not new,” says Schlacks. “Our telematics gives the contractor real time data on their fleet to make educated decisions. Now a contractor can see the utilization data and have a solution beyond just selling the equipment. If he sees it’s not being used or barely used, he can now rent it out. We have some contractors making up to $20,000 per month lending idle equipment. That’s huge for them.”

EquipmentShare, the Airbnb of construction equipment, has secured $26 million in new funding. 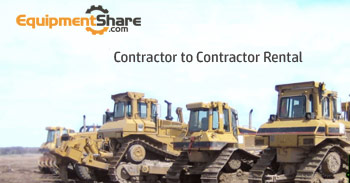 The firm has grown from two brothers’ bright idea of sharing construction equipment to a multi-million dollar firm with more than 100 employees and offices in Columbia, Missouri; St. Louis; Jacksonville, Florida; Dallas; San Antonio; Houston; and even Auckland, New Zealand.

This article was originally published on September 9, 2015.