What do you think of when you hear the word infrared? Thermal imaging for night vision goggles, communications, space telescopes?

Jesse Stricker, founder and CEO of Intek Corporation in Union, Missouri, which has been making industrial heating products, electric heating elements, heater modules and process ovens of nearly every dimension and description for nearly 20 years, prefers you think heat.

Infrared has a longer wavelength than visible light and can be used to heat almost anything, like microwave energy. And infrared is a far more efficient heating method than natural gas, traditionally used to heat industrial ovens. Almost every product has to be heated somewhere along the line — furniture, cars, planes, logo T-shirts, phones, food, drugs, you name it — and Intek ovens are used in numerous industries domestically and in countries as near as Mexico and far-flung as Dubai, United Arab Emirates.

A video showing the variety of Intek industrial ovens (5 minutes).

These programs are the:

Was the mission worth it?

And while the mission did not pay for itself immediately — Intek received orders from one German firm — Stricker says the mission continues to produce opportunities that may result in longstanding business relationships.

“For example, other German companies expressed an interest in talking with us, but time in each of the three locations we visited (Milan, Munich and Madrid) was limited. We just couldn’t get around to visit everyone.”

However, he says just this week Intek was contacted by an Italian company that plans to visit to pursue a working agreement as a sales representative for the Italian market. “So yes, the effects of the trip continue to produce results,” Stricker says.

Stricker would prefer not to release sales figures, but he will say 2014 was quite profitable and 2015 is looking to be far more so. The company hired a new salesperson at the start of the year and, if growth continues, Stricker says he’ll hire another by the end of the year.

“I’m afraid to go to bed at night,” Stricker said in a previous interview. “I don’t want to do anything to upset that momentum.” 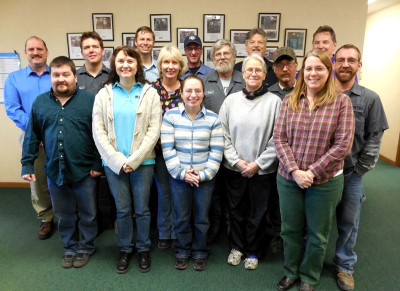 Some of Intek Corporation’s employees.

Is your business ready to maximize its export potential and achieve greater gains? If the answer is yes, connect with the SBDC’s International Trade Center today.