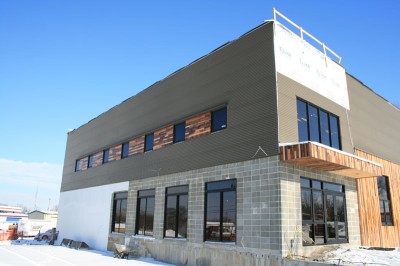 The newly renovated home of Logboat Brewing on Fay Street in Columbia, Missouri.

Tyson Hunt, CEO and one of four partners of Logboat, graciously points out the offices and a conference room and the tap room, where thirsty patrons can sip at tables. He explains the purpose and location of steam generators, a glycol cooling system and the huge stainless steel tanks trucked in from Oregon.

It looks like a complicated process — and it is.

Every beer lover knows it takes a combination of hops, barley, malt and water mashed together and cooked to make beer. But there’s much more to brewing than that. The resulting fragrant mash, blended to exacting specifications, must then be steam-heated and vented through stacks that will carry the steam out of the brewery, giving the whole building that intoxicating, malty-sweet aroma of beer in the making. The beer must then be pumped and cooled into fermenters, mixed with carbon dioxide, aged and then finished before it can flow from a tap or keg into a frosted glass.

This is an extremely bare-bones description of the process. Logboat head brewer Josh Rein knows much, much more but mostly just nods as his partner points out the gleaming new equipment’s salient features. Rein didn’t start brewing professionally until about four years ago when he began working at Broadway Brewery. In 2011, he became assistant brewer at Flat Branch Pub and Grill. He has since studied brewing technology at Siebel Institute in Chicago and in Munich, beer’s homeland. 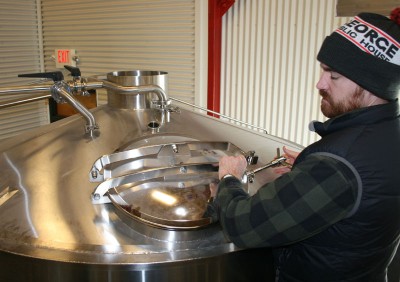 Like any business, however, it takes more than the right equipment and know-how to make good beer. It takes passion. And Rein, Hunt and co-owners Andrew Sharp, Judson Ball and Gardell Powell are all passionate craft beer enthusiasts who decided several years ago to transform their love of good beer into good business. And they are confident mid-Missouri is ready for a full-scale craft brewery. The city’s two current brewpubs (Flatbranch and Broadway), and another, already operational production brewery (Rock Bridge Brewery), says Hunt, have been enthusiastically received.

“I think this town is ready for us,” Hunt, who lived in Portland, Ore., for four years and was exposed to that city’s craft beer cornucopia, says. “Craft beer is exploding! People are paying more attention to artisanal beer now. There’s plenty of room for everyone.”

It’s worth noting that Logboat is a brewery, not a brewpub. The partners decided early on to not become a brewpub with its requisite restaurant, health code and server requirements. Logboat will employ outside distributors, Hunt says, strengthening an already strong business plan. 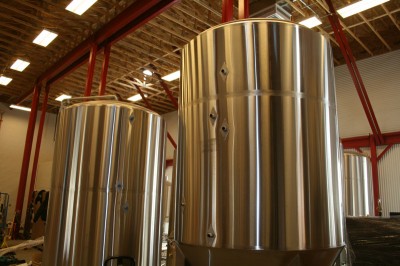 “We had the business plan down cold, we thought!” Hunt says. “Then we met with the MO SBTDC. They helped us edit the business plan and add pieces the people on the money side would need to read, then took our finances and grilled us line by line to make sure we had thought everything through. They helped us sell the company and get people behind it. They have been a huge part of building our confidence and getting us to where we are now.”

“Where” is a section of Columbia primed for renaissance one block from Columbia College, two blocks from the renovated North Village Arts District and a few more from downtown and the University of Missouri. It’s a part of town that’s suffered from benign neglect for more than a decade. That’s all likely going to change in 2014, however, with a new hotel, lofts and new businesses under construction.

The old plant that now houses the new Logboat would be unrecognizable to long-time Columbia residents. The building had to be torn down to its very foundation and rebuilt from scratch. Its industrial zoning was a plus, Hunt says, in deciding to purchase the property. It also had floor drains — a big plus, as cleanliness is a necessity in the brewing business. The partners are also installing energy-efficient doors and windows and recycled wood planks from a more than century old barn to give the brewery a warm, homey feel inside and out. 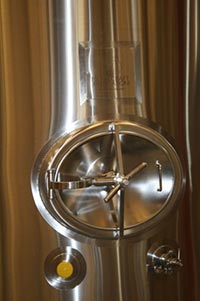 A tank manway, so called because it allows access into the tank.

The property also has a large side yard for music or movies in warmer weather and a large front yard that must be fenced off before it can become a beer garden. All this, the partners feel, will make Logboat a destination and not just a business. Hunt says the brewery’s walls will probably also be adorned with local art, further strengthening the brewery’s ties with its neighbors.

As of this writing, Logboat expects its mainstays to be:

Logboat also plans to produce a gluten-free cider and implement a barrel-aging program for higher-gravity beers to be aged in whiskey barrels, then blended to create delicious beers chock full of body, aroma and flavor.

Ball adds, “It’s been a crazy process and each new relationship has turned into another opportunity to learn something new from business folks in our community, even family members and friends willing to share their experiences. All of them have been instrumental in getting us to where we are today.”

Logboat Brewing Company LLC’s logo is popping up on bumper stickers all over central Missouri. It shows a silhouette of a logboat, or dugout canoe, containing a trapper wearing a coonskin cap and smoking a corncob pipe, a bearded settler and, in front, a Native American pointing the way.

“Missouri” means “people of the dugout canoes,” and the founders chose the name to honor the first people, the river itself, the explorers Lewis and Clark and the state’s heritage.

“The name just fit well with what we wanted to do,” says Logboat co-founder Mike Wolf. “It’s a symbol of exploration, a reminder to never stop growing and exploring, of keeping an open mind. It has so many meanings to all of us and will hopefully resonate with our customers, too.”

The wooden canoe in the courtyard for which Logboat Brewing gets its name.

Earlier this year, Logboat broke into the St. Louis market and plans to expand into Kansas City and Springfield, Missouri, by 2017.

Congratulations to the Business Development Program client brewmasters who took home silver from the 2017 Best of Craft Beer Awards in Bend, Oregon, in February:

This article was originally published on January 21, 2014.