Most serious entrepreneurs will go to great lengths to build a better mousetrap. Engineer Hao Li is so dedicated to his entrepreneurial dream he traveled more than 10,000 miles to pursue it, emigrating from his native China to Columbia, Missouri.

The “better mousetraps” he envisions will help dentists and orthopedists offer more reliable and longer-lasting materials to help their patients. 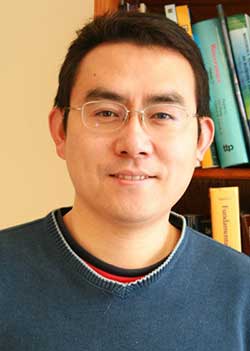 Hao, associate professor in the mechanical and aerospace engineering department at the University of Missouri’s College of Engineering, specializes in materials science. He focuses his research on biomaterials, nanonstructured materials, composites and medical devices. He plans to develop more reliable orthopedic, dental and cardiovascular devices to meet a growing demand from the health care community.

Like other ambitious students at one of the top engineering schools in China (Xi’an Jiaotong University), Hao wanted to get the best doctoral-level engineering training and to study high-tech approaches in the United States. He joined the faculty at MU in 2005, after earning his doctorate at Stevens Institute of Technology in New Jersey and pursing post-doctoral studies at Brown University in Rhode Island. 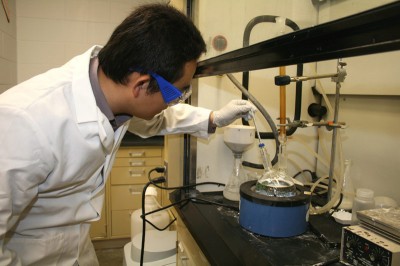 Through his research and development efforts, the engineer/entrepreneur focuses his research on biomaterials, nanonstructured materials, composites and medical devices.

“My current research is primarily funded by research grants from the National Science Foundation, the Environmental Protection Agency and the University of Missouri,” says Hao.

“I started working on orthopedic and dental implants in 1996, when I was a graduate student in China. Since then I have been working with many doctors and dentists, and I saw the need of patients for more reliable biocompatible medical devices.”

Hao hatched the idea for starting a company many years ago. But it was only after his arrival at MU in 2005 that he incorporated his company, Nanova Inc., with the help of several colleagues: Dr. Quingsong Yu, assistant professor of mechanical engineering at MU; Dr. Meng Chen, an electrical engineer with 10 years of experience in medical devices; and Dr. Kenneth Lambert, an orthopedist.

“Our company’s short-term goal is to successfully commercialize our first medical device by the end of 2010,” says Hao. “Our long-term goals are to establish the infrastructure to help researchers develop and commercialize better medical devices in the orthopedic, dental and cardiovascular areas.”

While he has made great strides with his research and his company, Hao knows significant progress comes only with much time and work.

“Product development takes quite a bit of effort, certainly more than I expected,” he admits. “We also lack the expertise in management and business operation. Fortunately we have found people with the expertise in both areas to help us.” 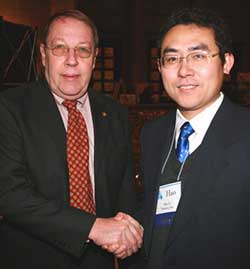 Hao has found Gann’s years of business experience have helped Nanova address immediate challenges, and is providing a framework from which the entrepreneur can plan for future growth and development of his company. Rehrig’s technical background in engineering and technology commercialization has helped Hao identify additional funding opportunities and hone his grant proposals.

With the dual goals of building better materials and tools for medicine and dentistry while also building a viable commercial enterprise, MU engineering Professor Hao Li has found at UCIE the reliable MO SBTDC specialists to tap in quest of commercial success. 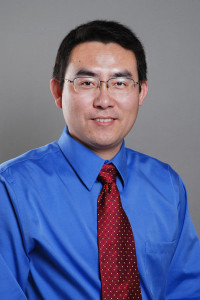 Li and his partners’ research on nanostructured materials, composites and medical devices has led to genuine breakthroughs in orthopedics, dentistry and cardiovascular science. This newsletter described on some of these breakthroughs in a 2008 success story.

The Chinese venture capitalists will invest an estimated $7 million in the joint venture, $4 million directly in the firm’s Columbia, Missouri, operations in the next two years, said Li. Most of the firm’s domestic manufacturing and sales will be conducted in Columbia.

At the ceremony held at MU to commemorate the investment, Li said the partners received multiple investment offers but were waiting for investors who could move the firm’s products to commercialization.

Dr. Jim Gann, technology business specialist with the MU SBTDC, has advised Li and Yu since the business was founded. Gann and a team of MO SBTDC technology business specialists including Denise Fields of the University of Missouri-Kansas City (UMKC) SBTDC and Bill Stuby of the MO SBTDC’s sister program, the Missouri Procurement Technical Assistance Centers, previously helped the scientists with business planning and development. This included conducting intensive market research, obtaining federal Small Business Innovation Research Program (SBIR) and National Institutes of Health funding and facilitating introductions to key stakeholders in Columbia and in Missouri. 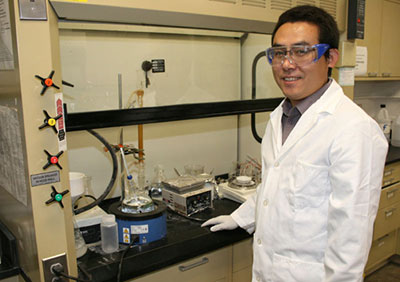 Through his research and development efforts, the engineer/entrepreneur Hao Li and his business partners are using nano-technology to develop cutting edge medical and dental devices.

“Denise [Fields] has been so helpful. She helped me get connected with investors and advised me on many things I didn’t know much about, like financing. And Jim [Gann] has been very helpful on the SBIR applications — they’ve just helped us with a broad variety of things.”
Dr. Hao Li, co-founder of Nanova Inc.

Nanova’s bone screws and dental fillings are made of polymers and tiny strands called nanofibers. These fibers, composed of calcium phosphate, the same material as bone and tooth minerals, can be 1,000 times smaller than a human hair. Because they are so small and so dense, nanofibers are also incredibly tough, much stronger than stainless steel. A single nanofiber is very, very weak.

Nanova researchers and scientists from the UMKC School of Dentistry and the University of Tennessee-Memphis are also working on commercializing what’s called an atmospheric cold plasma brush. Non-thermal plasma, which is a partially ionized medium like gas generated by electrical discharge, contains energetic electrons, ions, chemically reactive radicals and ultraviolet; these plasma components rapidly destroy harmful microorganisms and have enormous potential in dentistry. Clinical trials with the brush have already been conducted. It will be ready for FDA clearance in a year or so, said Li.

These products, and others in development such as a new type of coronary stent, could transform dentistry, orthopedic surgery and cardiovascular medicine as we know them.

And that’s both a problem and an opportunity. “It will take a lot of effort,” said Li. “We’ll have to educate the dentist, the orthopedist, the cardiovascular specialist that there is a better way, and that could take time and be very expensive.”

At the ceremony, Li said he was very grateful to all Nanova’s partners for their investment, business acumen and enthusiasm. “For success in business in the long term, the right team is at least as important as money,” he said.

Dr. Hao Li, associate professor in the University of Missouri Department of Mechanical and Aerospace Engineering, co-founder and president of Nanova Inc., has won the President’s Award for Economic Development.

The $5,000 award recognizes faculty for distinguished activity in meeting the university’s goal of serving as an economic engine for the state through entrepreneurial innovation. The awards are presented annually to faculty members across the four campuses of the University of Missouri System who have made exceptional contributions in advancing the mission of the university.

Nanova Inc., founded in 2008 with assistance from the Business Development Program, produces orthopedic, dental and cardiovascular devices using biocomposite and nonthermal plasma technologies, an outgrowth of Li’s and other professors’ ground-breaking research. In 2013, Nanova secured Chinese venture capital and is currently building a 6,000-square-foot manufacturing facility in Columbia, Missouri, expected to employ 20 individuals by 2015.

The firm has received FDA approval and plans to launch its first medical device this year. Read the MU news release.

We’ve provided regular updates on Nanova Biomaterials Inc., incorporated in 2007 with the help of the Business Development Program’s Missouri Small Business and Technology Development Center, but this might be the best yet: Nanova has begun manufacturing its first product, a fluoride dental varnish called StarBright, in its northeast Columbia, Missouri, facility after receiving Food and Drug Administration (FDA) clearance. The company held a ribbon-cutting ceremony at its 6,000-square-foot, $1.5 million facility in October.

Dr. Hao Li, associate professor of mechanical and aerospace engineering at the University of Missouri’s College of Engineering and Nanova co-founder, said in a recent interview he hopes to have the varnish on the market by year’s end.

The company uses nanotechnology, which is the manipulation of material on a molecular and atomic level, to produce particles with new properties. The dental varnish, for example, contains more fluoride molecules than other products on the market. Nanova is also working on new biofillers for cavities and a bone screw.

Dr. Hao Li, Nanova co-founder, talks about the company and its products in this 3-minute video.

Got cavities? There’s an innovative, MU-developed solution for that.

We first profiled Nanova and Dr. Hao Li, associate professor of mechanical and aerospace engineering at the University of Missouri’s College of Engineering and Nanova co-founder, in 2008 and most recently a year ago.

Both products use nanotechnology, the manipulation of material on a molecular and atomic level, to produce particles with new properties, in this case dramatically stronger dental products. Once hardened, the nanofibers in NovaPro Flow are reportedly as solid as concrete, ensuring greater longevity than other dental products now on the market and allowing patients to go longer before replacing fillings.

We’ve provided regular updates on Nanova, founded by four researchers, two from the University of Missouri College of Engineering, Drs. Hao Li and Qingsong Yu, professors of mechanical and aerospace engineering. Nanova performs nanotechnology research that leads to the manufacture of advanced dental and other products.

Nanova’s management was also enthusiastic about ITC counselors and interns evaluating global markets for a new FDA-certified product, the Vas-Q-Clip, in late 2016. This is a polymer ligation clip used in several surgical procedures. (Ligation is simply the closing of a blood vessel, duct or tube using a ligature, or clip.) The worldwide ligation clip market is dominated by one firm that significantly increased prices in 2012. Nanova and the ITC believed the firm’s new product was an excellent opportunity to win customers. 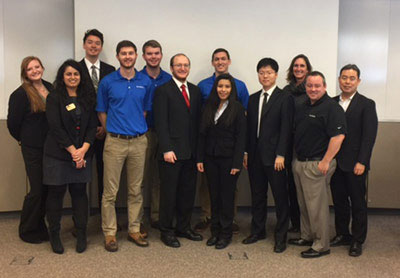 Nanova requested analyses of certification and market entry requirements for different markets; data on a country’s healthcare system; market size, distribution, sales channel and purchasing information; potential distributors or partners; and appropriate pricing. The research team then identified 30 markets; that list was then whittled down to five countries for appendectomy and gall bladder surgeries in Asia, North America, Africa and the Middle East. The final report reviewed each country in detail, including its overall economy and unemployment rate, barriers to U.S. trade or investment, taxes, medical device registration procedures, packaging, labeling and distribution.

“The information we received in both projects helped us define where we may strive in our international business efforts,” he writes. “We were provided with technical trade information we weren’t aware of and socioeconomic information of value, too.” The International Trade Center is a central resource for quality global trade research, analysis, education and training. The ITC can help Missouri businesses:

In the past two years, the ITC has completed 29 global market research projects for 20 companies using 91 interns and six skilled MO SBTDC international trade counselors. In total, student interns and counselors have logged about 11,000 hours on these projects — 120 hours for each student intern.

This article was originally published on October 20, 2008.