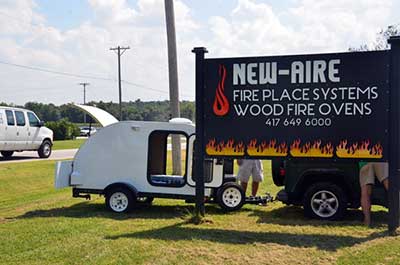 One of New-Aire’s teardrop trailers.

Surbrugg and Robinson have helped Ware, his wife Julia and son Anthony on issues ranging from accounting and figuring out cost of goods sold to researching new markets in the northern U.S., perfecting a business plan to get a loan, finding new dealers nationwide and identifying the best trade shows to attend.

Where does he get all these ideas?

“My brother saw one (teardrop trailer) come through Joplin, and I started investigating,” he says. “The idea had been around for a while but took off after a 1947 Mechanics Illustrated article on how to build one. At the same time, my brother and I were building a teardrop trailer. I also had this wood-fired oven and a friend came in, a school administrator, and he said, ‘Wouldn’t it be neat to put it on this trailer!’ ”

It would. And it’s bright ideas like this that earned him the Rising Business of Year award from the Carl Junction chamber and a spot in the highly selective Goldman Sachs 10,000 Small Businesses program. 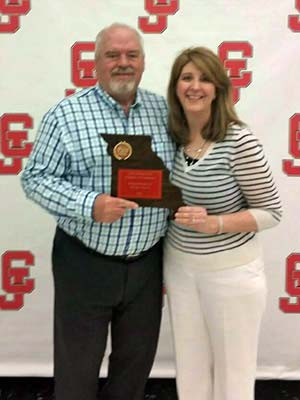 10,000 Small Businesses helps entrepreneurs create jobs and economic opportunity in their communities by providing greater access to education, financial capital and a strong network of advisors and peers. Surbrugg and Robinson urged him to apply for the program and helped him complete the paperwork. He expected that would be the end of it. He was pleasantly surprised when Goldman Sachs selected him. He will fly out for two separate sessions at Babson College in Wellesley, Mass., beginning this August.

Goldman Sachs says that the program has served more than 8,000 small business owners in all 50 states, resulting in immediate and sustained business growth. The firm also says program graduates grow revenues and create jobs at rates that outperform the broader economy: 82 percent of graduates increased revenues within 30 months of graduation vs. 45 percent of all small businesses; 61 percent created jobs vs. 23 percent of other small businesses.

Ware is eager to attend and improve his business. His business is highly cyclical, as you would expect from a fireplace systems firm. But he’s already planning to hire a sales rep to add to his existing eight hard working employees. 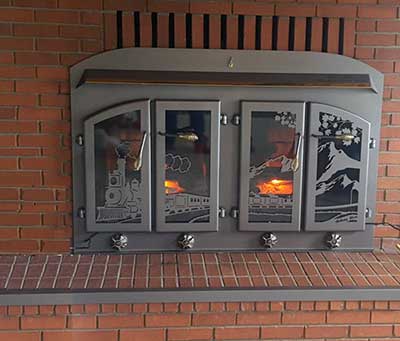 A New-Aire custom fireplace installed in a brick hearth.

He’s also a veteran, having served in the Missouri Army National Guard, helping build roads in Honduras, among other duties. How long did he serve?

Have we mentioned he’s an engineer?

[An extremely accomplished if not degreed one: Ware’s degree is in industrial education and he was an industrial engineer and plant manager for 30 years, working in the clothing industry (Big Smith, King Louie America) and for EaglePicher Technologies in Joplin.]

Learn more about New-Aire Fireplace System on their Facebook page.