Artisan Spirits, LLC, DBA Pinckney Bend Distillery, New Haven, is the brainchild of partners Jerry Meyer (CEO, president, CFO, many other duties), Tom Anderson (a distiller with a degree in biochemistry, responsible for all distillation, blending and formula creation) and Ralph Haynes (sales, marketing and pretty much everything else under the sun), all New Haven residents, brewing and distilling hobbyists who decided to turn their passion into profit. 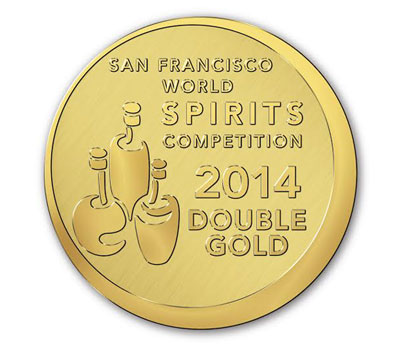 (“The color is amber with hints of peach and rose … Light, soft and very viscous when swirled. The nose is cinchona, rose and lemongrass, with hints of something earthier to ground it all,” reads one review of their tonic syrup. It gets even better when the gin is added.)

Pinckney Bend is part of a larger, international craft spirits trend. The crafts spirit industry today is a lot like the craft beer movement 20 years ago; people are tired of the same old commercial products and thirst for something different and preferably local.

While spirits consumption has been rising in the U.S. for decades, craft spirits consumption accounts for less than one percent of the domestic sprits market. What craft spirits lack in market share, they make up in ‘mind share,’ however. A decade ago, there was only one crafts spirits maker in Missouri and anywhere from 50-70 nationwide; today, there are more than 650 U.S. craft distilleries and eight in Missouri. In 2012, four Missouri distillers, including Pinckney Bend, took home top honors from the San Francisco World Spirits Competition.

Add in the fact that the newly minted middle class in developing countries has a growing thirst for quality, imported spirits, with double or even triple-digit growth for some products, and you have a formula for success.

Keying on these two emerging trends have been major keys to Pinckney Bend’s success, Haynes says. Haynes owned and operated a vineyard for a short time, and the partners had brewed craft beer for years. They looked at the possibility of establishing a craft brewery, but the numbers just weren’t right.

“Then, just for grins, we began distilling some of our brews,” says Haynes. Fermented grain in beer is the base alcohol for malt whiskey. “The results were encouraging.”

So encouraging that after exhaustive market and product research, securing a license from the Alcohol and Tobacco Tax and Trade Bureau to manufacture and distribute spirits and “the distilling equivalent of stone tools,” the partners sold their first bottle of craft gin Nov. 21, 2011.

“Sure, I remember the date!” Haynes says. “After two years of working and planning, the day comes when you have to get up in the morning and sell what you’ve made.”

And he says that Pinckney Bend wouldn’t be where it is today without the BDP’s International Trade team of Larry Dill, director, Jackie Rasmussen and Ron Mueller, international trade specialists; the U.S. Export Assistance Center in St. Louis’s Kristi Wiggins and the Missouri Department of Agriculture, which sponsored a trip to China attended by Haynes.

“They’ve been nothing but encouraging and helpful,” he says of these partners, singling out Rasmussen. “Jackie was the one who really got us started. We had always thought about exporting, but not enough to really do anything. Then one day [in 2013] I ran across some promotional material for the international team with a phone number, and I called. Larry and Jackie came out for a meeting, and that’s how it started.” Rasmussen, says Haynes, provided him with access to reams of export data and more importantly, how to read it.

“She helped us develop an export business plan. We put a hell of a lot of effort into it, and so did she. That’s what really got us rolling,” he says.

Rasmussen referred him to an exporting workshop, which led to a meeting with the Missouri Department of Agriculture, who encouraged him to go on a trade mission to China. In Beijing, a U.S. embassy trade officer recommended making common cause with other craft distillers to create a portfolio of craft brands represented by knowledgeable distribution partners.

“And a light bulb went off in my head,” Haynes says. It made perfect sense to pair with someone who sees value in craft spirits, and is able to exploit that strategic advantage. That person is an American of Chinese descent in Singapore who speaks impeccable Cantonese, easing access into the enormous Chinese market.

As for the distillery’s name, it’s named after a lost river boom town called Pinckney Bend.

You can see the site from the distillery. It’s mostly bottom land now but was once a thriving settlement, the seat of Warren County and a notoriously difficult riverboat navigational challenge. It was named after Charles Pinckney, Revolutionary War hero, signer and some say chief draftsman of the United States Constitution, the man who secured navigation rights for a fledgling United States from Spain to the Mississippi River.

“All in all, it [the distillery name] had a sort of Brigadoon feel to it,” says Haynes that appealed to all three partners. It appeals to the public, too, many of whom find their way to the distillery, smack in the middle of Missouri’s wine trail. The tasting room is virtually a separate business; for a modest fee, customers can sample their fine spirits then, hopefully, buy. “It’s been hugely successful,” says Haynes. “It’s paying our salaries right now.”

The awards, and the often gushing reviews and accolades which follow, are all part of a deliberate strategy, says Haynes. 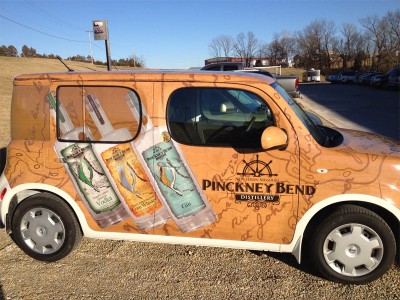 The firm’s minivan is an object lesson in mobile advertising.

If you’re a worldwide spirits conglomerate with mammoth, international ad campaigns carefully keyed to each market, advertising can work wonders. If you’re a small firm like Pinckney Bend, winning prestigious competitions with the resulting flood of publicity works as well at home and abroad. International distributors are keenly aware of the newly awakened global middle class with their spending power and taste for craft European and American products and contact the distillery, wanting to buy and distribute.

The distillery’s reputation has led to an Italian partnership — one order alone was 270 cases — even Caribbean and Central American distributorship.

Their best seller, Haynes says, is gin. This is not the swill that often passes for gin in America — “We’re very serious about it,” he says, blending nine organic botanicals into a beverage that’s bested such high-end brand names as Beefeaters and Bombay Sapphire. And it’s the only gin on the planet with its own companion tonic syrup.

The growth in cocktail culture hasn’t hurt — “Folks used to order premium wine,” Haynes says. “Now many are ordering high-end cocktails. The entire culture is changing — the people serving you are no longer bartenders, they’re mixologists.”

His favorite? The aged whiskey.

“You take a traditional American product [like whiskey], age it in the Scottish way,” with barrels made of locally sourced oak, another selling point, he says. “It has vanilla notes, it’s beginning to pick up stone fruit flavors — you know that fragrance you get when you open a fruit cake? Those nice fragrant fruit oxides.”