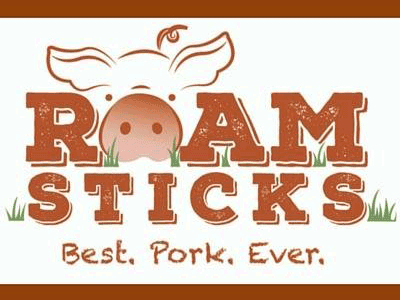 John and Holly Arbuckle, owners of Singing Prairie Farm in La Plata, Missouri, own and operate a pig farm. And not just any old pig farm. Their roaming, contented pigs are literally the foundation of the first and only non-GMO, pasture-raised pork snack stick available nationally, Roam Sticks. And they expect a Kickstarter campaign just launched to further develop the brand and recruit more pasture-based farmers.

Born into a multigenerational farm family (he’s a ninth generation farmer), John Arbuckle continued the agricultural tradition, graduating with a degree in sustainable agriculture from Fort Lewis College in Colorado. One of his greatest passions was adventuring. From working as a raft guide on the Arkansas River to climbing Aconcagua, the highest peak in the western hemisphere, and crossing the Chihuahua Desert on a donkey named Milagro, Arbuckle loved to roam the great outdoors.

Fast forward to 2010. Arbuckle settled down with his wife and two kids in La Plata, a tiny community about 15 miles south of Kirksville, Missouri. An advocate of healthy eating, Arbuckle started thinking about developing a convenience food in line with his passions for sustainable agriculture and for roaming. The Arbuckles wanted it to be a product they would be excited giving to their own kids on family adventures and came up with “Roam Sticks” because the pigs roam on pasture and the consumer can then roam with a far healthier, on-the-go snacking option.

Not that it’s been a walk in the pasture.

“Starting a small business, you run into questions,” says Arbuckle. “To jump from a farmer’s market style farm to a national product company was a steep learning curve, and I very quickly came to the limit of my own knowledge.

“You have to realize that’s where it’s necessary to find someone with more knowledge who can direct you. Otherwise you are just spinning your wheels.” 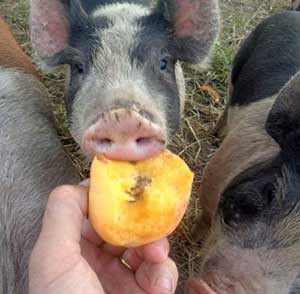 Singing Prairie Farms offers the pigs a good life, including a diet of fresh fruits, vegetables and grains.

The Arbuckles found that knowledge in Kirksville. The couple received advice and consultation from the Kirksville Regional Economic Development Inc. (KREDI), the Missouri Rural Enterprise and Innovation Center (MREIC), Truman State University and counselors of the Missouri Small Business and Technology Development Centers (MO SBTDC). The MO SBTDC is a unit of the University of Missouri Extension Business Development Program (BDP) which provides professional business analysis, business consultations, access to relevant technology and training on a variety of business topics.

Former Truman State SBTDC business development specialist Dan Hamlet was the first to help direct the Arbuckles toward proper record keeping and how to think nationally. That role is now filled by Anastasia Tiedemann, who is also advising them on the current Kickstarter campaign. Charles Holland, business development and international trade specialist with Monroe County Extension SBTDC, also advised them about possibly going international. Non-GMO goods are popular globally, especially in Europe.

“Everyone we have worked with has just been extremely helpful,” Arbuckle says. “It has been an incredible boon to us. Dan Hamlet was exceptional. Charles Holland was great to work with. And Anastasia has just been a godsend.”

The Arbuckles’ goal for the Kickstarter campaign is $15,000. Donors receive Roam Sticks as a thank you gift, with the number of sticks a reflection of the donation. For example, a $48 contribution yields a box of 24 snack sticks; $26 a 12-pack.

The snack sticks currently come in two flavors: hickory smoked pork with uncured bacon and hickory smoked pork with pineapple. And because of their pigs’ more natural and tranquil lives, the Arbuckles’ pork is rich in natural beta-carotene; vitamins C, D and E; and Omega-3 fatty acids. Omega-3 acids may reduce inflammation, lower the risk of heart disease, cancer and arthritis and appear to be vital to cognitive and behavioral function. 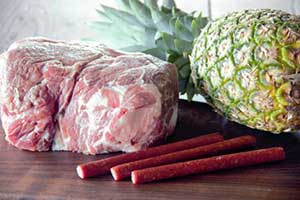 “It (the Kickstarter campaign) is our effort to grow the company,” Arbuckle says. “But it’s also to raise awareness of non-GMO, pasture-raised pork products like ours. It is not strictly a fundraiser.”

What makes the firm relevant, Arbuckle says, is two things: “One, we have grown and sourced a delicious product, really one of a kind. There’s no other pasture-raised pork sticks like us. Second, we are part of a larger movement. So many people out there don’t think factory pig farming is a great idea, and the non-GMO movement is extremely strong and growing.”

He goes even further, calling his line of business sacred.

“Yes. You have to have respect for the sacredness of all living things,” Arbuckle says. “We can say with absolute confidence that we have done everything we can to provide them (the pigs) an enjoyable life.” They do look happy, roaming and snuffling in search of the pea vines, alfalfa, apples, peas, turnips and oats planted on Singing Prairie Farm.

“When it gets right down to it,” he says, “everything we consume should be viewed that way (with reverence). Pigs are no different. They are worthy of our respect and care, and we should give them happiness, contentment and growth. One day, all that care and energy will come back into our bodies.”

Roam Sticks are sold in the Thrive, Natural Grocers, Clovers Natural Market and Lucky’s Market chains as well as in independently owned groceries and health food stores; and through Amazon, Barefoot Provisions, One Stop Paleo Shop and RoamSticks.com, among other e-tailers.

John Arbuckle, co-founder and co-owner of Roam Sticks, hails from a farm near Champaign, Ill. He and his wife Holly decided to raise a family and grow their business in tiny, rural La Plata.

Why La Plata? Why Missouri?

“Well, we moved here because we have friends here. And Illinois was becoming cost prohibitive in terms of taxes and land prices.

“Here, we can appreciate family time,” he says, enjoying farm life with wife Holly, son Noah, 8 and daughter Mary, 5. “They like to help around the farm. They’re not afraid of challenging farm work.”

Arbuckle doesn’t mind the relative isolation. In fact, he savors it.

“Out here, you can stand on top of a barn and watch your dog run away for three days,” he jokes.