Matthew Wood, founder and CEO of SCD Probiotics, which makes probiotics for a variety of human, animal and environmental use for customers in every corner of the globe in a new, state-of-the-art fermentation and bottling facility in Kansas City’s West Paseo District, had an organic interest in the field.

His mother, an artist and founder of the Union Hill Arts Gallery in Kansas City, died of leukemia when he was just 18, cause unknown. Wood theorizes it was likely not one but many factors to blame, such as the volatile organic compounds found in paints and the DDT widely used in the 1950s and 60s on commercial crops, in gardens, for urban mosquito eradication, even domestic pest control.

Wood later traveled to Costa Rica as part of his undergraduate University of Missouri curriculum to conduct research on banana plantations. There he attended a lecture where the speaker discussed introducing probiotics in agriculture, then a relatively new concept — “And I was just taken with it right away,” he says. “It just clicked.”

Probiotics, defined by the World Health Organization as “live micro-organisms which, when administered in adequate amounts, confer a health benefit on the host,” may be as old as civilization itself. The ancient Greeks, Romans, Koreans and Chinese knew of and consumed fermented foods proven to be beneficial to their digestive health. Probiotics as we know them today, as supplements, date from the 1950s when research on this ancient practice began in earnest.

Wood went on to earn a master’s degree at the University of Ryukyus in Okinawa, Japan, specializing in probiotics research. Like Henry Ford, Steve Jobs and the Wright brothers, Wood then started SCD Probiotics from a garage. That shoestring operation in Columbia has grown into an international success with dozens of employees, towering 76,000 gallon fermentation tanks, a 30 percent increase in sales from 2011 to 2013, a production volume increase of 229 percent from 2012 to 2013, kudos from governors and government ministers and a simple yet sophisticated licensing program worthy of companies many times larger than his.

“Denise was just great,” he says. “The Missouri Department of Economic Development, the Missouri Technology Corporation, the Economic Development Council of Kansas City [all of whom provided funding and other incentives] have all been very helpful. As an entrepreneur, I can say every little bit helps. It does take a village.”

The company has also secured financing to spin off a division, Proviera Biotech, LLC, which applies the concept of beneficial bacteria to tanneries. Leather tanning is a notoriously toxic process that requires a witches’ brew of chemicals like cyanide, aluminum sulfate and sulfuric acid, and Wood says Proviera has been quite successful. “Tanneries have used the same methods for a hundred years, maybe more,” he says, and tanneries worldwide have enthusiastically embraced the probiotic products. “Proveria provides a totally new approach, much more environmentally friendly, safer for workers, much less toxic to the leather itself. In many ways, this is an example of a broader trend: the older technology is chemistry, the new biology.”

That new way is working: Proviera’s sales also increased dramatically, more than 120 percent from 2012 to 2013.

But agricultural, livestock and tannery applications are just scratching the surface of probiotics’ potential.

Wood and SCD have expanded the concept of beneficial microbes to backyard composting  and flowerbeds, everyday household use, wastewater treatment and pet health. SCD products have been tested in the toxic aftermath of Hurricane Katrina and the 2004 Southeast Asian-Indian Ocean tsunami, with very good results. Receding flood waters can leave a toxic stew of mold, salinity, disease, chemicals and oil, and SCD probiotics tested in New Orleans and in India helped neutralize them.

In fact, the concept of probiotics for environmental remediation — be that environment a human or horse’s gut, composting heap or receding flood waters — has been very well received all over the world. So much so that more than 70 percent of the firm’s sales come from abroad, thanks to an innovative licensing arrangement whereby interested parties apply, are vetted and licensed to manufacture SCD probiotics in their own facility. Governor Jay Nixon named the firm the 2013 exporter of the year.

Better yet, Wood received an award from Poland’s Minister of Agriculture and Rural Development for the firm’s contribution to soil science and organic technology that could revolutionize agriculture. Modern large-scale agribusiness also employs a swarm of chemicals to grow food in ever-more depleted soil.

“People are willing to pay a premium for something from the U.S. because they trust it,” says Wood.

Wood and the firm have also received awards for commercial biotechnical research from the U.S. Commerce Association, been named a top 25 company in Kansas City with less than 25 employees by KC Small Business and a Rising Star of Kansas City Business, among other honors.

Receiving awards is great, but Wood is more excited that his bestselling product, SCD Essential Probiotics for humans, has been accepted by the CVS pharmacy chain. “Five thousand CVS stores around the country will carry Essential Probiotics!,” says Wood, and not repackaged as a store brand, either, but with the firm’s distinctive sunburst within a recycling circle.

Larger sales are nice, too, but that’s not why Wood keeps innovating. Last year, Wood was touring a Turkish tannery which had switched to SCD tanning industry probiotics — organic degreasing, soaking, dispersing and emulsifying agents. Wood was surprised and pleased when a worker came up and hugged him — “She said she used to get rashes on her feet and hands,” he says. “That had just vanished.”

And that, he says, is what it’s all about.

“I got into biology, agriculture, health, because of what happened to my mother,” he says. How we grow the food we put into our bodies, process the water we drink and flush, the fabrics we wear, can affect our health, sometimes dramatically. “And now, with our tanning technology, we’re reducing pollution and improving people’s lives who work in the industry. It’s rewarding to have it all come full circle.”

The equine market isn’t like most animal markets — cattle, sheep and other livestock, or pets. Show horses, racehorses and other specialty horses are trained relentlessly and fed a diet utterly foreign to them for maximum performance. Instead of roaming in lush pasture, they’re confined to a stall 20 or more hours a day and fed grain, protein and a blizzard of byproducts, often in barns with poor ventilation. Their only chance for exercise comes during morning work-out time. It’s little wonder many of them become stressed, lose weight, and develop health problems such as small airway disease, gastric ulcers or recurring, debilitating diarrhea. 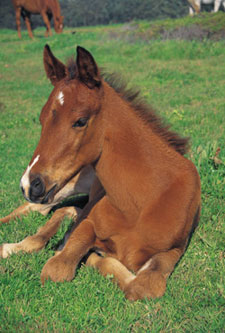 “In a company like ours, with quite a few market segments and quite a few innovative products, it can be hard to focus on any one area too long,” says the aptly named Phil Botana, business development manager, SCD Probiotics. “Real life steps in. You get tied up in a project, and other areas take back burner. You need additional resources to do the heavy lifting [market research] and in a small company, that can be very hard to do, expensive and time consuming.”

The firm already had an effective liquid probiotic to be poured over feed to help with GI issues, and trials proved it worked on horses. But the specialty equine market presented more than a few challenges. Finding the right distribution partners was one, because of the way that industry is set up — “It’s more fragmented than, say, retail companion animal distribution,” he says. Race horse owners don’t exactly go to PetSmart. “It’s just a completely different breed. We knew we faced real challenges.”

Botana was somewhat wary but says the process went far more smoothly than he expected. “Denise helped streamline the process, drilling down to horse farms and trainers, coming up with solid, useable information. That group of people doesn’t have research points like complete websites, the most current contact information and so forth. Secondly, she helped us focus on distributing through veterinarian channels to consumers, drilling down to find the key players. We got what we really wanted, didn’t cast too big a net and end up with nothing useable.

“We honestly had no expectations, and received five or six good leads from the work Denise did,” Botana says. “It really worked out well.” He adds that he and the firm are now following up and pursuing these leads.

Most microbial technologies are based on the pure culture method of manufacturing. This means the desired microorganisms are grown as individual strains in sterile media. If a finished product contains more than one strain, each strain is typically grown in pure culture then blended at the time of packaging.

SCD Probiotics grows selected strains together. Each strain develops while interacting with other strains, ultimately becoming a small ecosystem that’s much more resilient and works together synergistically. This methodology is more how microorganisms actually survive in nature; natural strains never exist in isolation or pure culture but are always interacting with other strains.

SCD’s live microbial components also have a longer shelf life, a minimum of 12 months, with SCD mother cultures having a shelf life of more than three years.