In 2003, construction engineer Floyd Simms was working as a project director for a St. Louis-area construction management company. In the middle of the project — an airport-related parking facility at Cypress Avenue and I-70 — his employer ceased operation.

“They told us on a Tuesday and by Friday the doors were closed,” recalls Floyd. “It was right then that I decided if the doors were ever going to close again on a company where I worked, I was the one who would close them.”

The path that took him to business ownership was one of successful progression. After earning a bachelor’s degree in civil engineering from the University of Missouri’s College of Engineering, Floyd spent six years in bridge and highway construction with the Illinois Department of Transportation.

Later he returned to his hometown, where he worked for the City of St. Louis as a project manager at Lambert International Airport. Among his projects was building a glycol recovery system that helped make the airplane deicing process more efficient, cost-effective and environmentally friendly.

He parlayed that three-year experience into a design position with the commercial construction firm Parsons-Brinkerhoff. There he designed and built the runway extension at Lambert Field.

That experience led to the Cypress Avenue parking facility job, which included several service buildings. Despite his employer’s demise, Floyd remained on the assignment while working under the project’s primary contractor, Brinkman Construction.

“But while I was finishing that job, I got serious about starting my own company,” says Floyd.

He incorporated on Nov. 4, 2003, forming the Simms Building Group, Inc. He was a one-man band for a while, but soon hired his first employee, an administrative assistant to keep the operation organized.

“In the construction industry, you have to be looking at least 12 months ahead for work,” he says. “It’s the nature of the business.”

With constant foresight and planning, the construction jobs kept flowing to Simms Building Group. Floyd and his growing staff of superintendents and project managers tackled all sorts of work including commercial, industrial, educational and residential projects.

But demand for construction began to slow in 2008, as did everything else in the economy. Floyd felt he needed a little outside advice to help get through the downturn. He talked with Alan Richter, executive director of the Regional Union Construction Center in Wellston. Richter led Floyd to Kevin Wilson, director of the Missouri Small Business Development Center (SBDC) in the St. Louis region.

Wilson turned out to be a breath of fresh air for Floyd. The SBDC director helped the construction owner view his business from a slightly different angle. Wilson also helped Floyd discover the advantages offered by FastTrac business training courses.

Carolyn Jones, then Missouri PTAC counselor based in the same office suite as Wilson at that time, has helped Floyd set up a bid-matching profile to match his firm’s capabilities with the needs of government agencies seeking construction services. Jones also is helping Floyd apply for certifications — such as a HUB zone (historically underutilized business zone) certification — to allow his firm to broaden its eligibility for government contract bidding.

“Carolyn and M[issouri]PTAC are tremendous resources,” Floyd says. “And I’ve found Kevin Wilson is a very upbeat person. He’s surrounded himself with a lot of talented folks at the SBDC who know their business.” 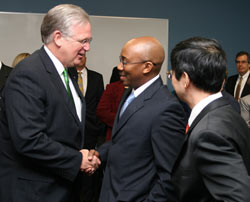 Wilson helped Simms apply to the UEL program, and the UEL granted the Simms Building Group a loan in April 2012.

Simms wrote to Wilson, “Wanted to let you know that we closed today on the UEL! I also wanted to express my sincere gratitude for your helping me through this process. This UEL is the start of Simms being able to rebuild. These funds will help bridge us through upcoming work that can turn the company around in less than a year. Thanks again.”

As a direct result, in 2012, the Simms Building Group added five jobs when most construction firms were laying people off. Revenues rose nearly $4 million, to $12 million.

“I’m just glad I’m able to help,” says Wilson. “His [Simms’] company is now trending in a positive way and looks a lot better than last year. I feel confident they will grow as St. Louis’ economy grows.”