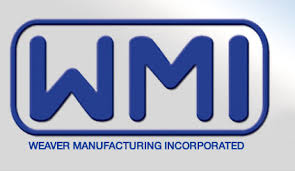 The firm was founded in 1983 by James Weaver, a plant manager at Columbia’s 3M facility, just in time for the PC revolution. 3M approached Weaver to see if he would be willing to open a contract manufacturing plant. Chuck Korte, the retired 3M facility’s manager, came onboard about six years later. Weaver has since recruited his young son, David Weaver, now president, to manage the company. Korte’s son Jon now manages the plant.

Continuity and the booming tech economy of the 80s were not issues. WMI began to assemble computer cables, flat ribbon cables and other complex products for the nascent PC industry. It picked up the 3M respirator contract in the late 80s and has also done work over the years for Square D, Goodyear Tire, Detroit Tool, Kelly Springfield Tire Company, Watlow Corporation, Science Applications International Corporation and Rockwell Automation, among others. WMI has also exported products to China, Germany, Canada, Poland, Brazil and Hungary.

The firm had three separate facilities and several hundred employees. But first some larger manufacturers with whom WMI had good contracts outsourced their work. Then, later, the recession hit.

David Weaver knew his firm was solid enough to survive the recession. But how well?

Bateson introduced WMI to new product developers needing sources for preliminary manufacturing of bright product ideas; helped them get their name and capabilities circulating in industries that could use such a highly adaptable, American manufacturer; intensively researched new markets and new products; and recommended outside sales agents.

As a result, WMI survived the downturn and retained about 25 good jobs with the assistance of Bateson; and Donna Leonard, director, and Ken Scheve, project manager, Mid-America Trade Adjustment Assistance Center (TAAC). TAAC is a matching grant program that helps U.S. manufacturers fight back against import competition. The MO SBDC and TAAC programs are both part of the University of Missouri Extension Business Development Program (BDP).

Weaver has nothing but praise for Bateson’s expertise and efforts.

“Paul just brings a wealth of experience and ideas for us to consider as we survive these challenging economic times and global competition,” said Weaver. “He’s just great in a mentoring capacity. Paul has come to know the staff here through the years, and he understands our strengths. He comes from a manufacturing background [Bateson has been a manager with Nestle, Heinz Pet Products, Dairy Farmers of America, Yost Foods, Inc. and Food Basics Co., among others) and has a wide expanse of experience. So meeting someone who understands all the aspects of manufacturing is a terrific resource.

“We all really appreciate and respect Paul greatly.”

For their more than three decades proving a small manufacturer can survive and even thrive, WMI was named an Excellence in Business Award winner at the 2015 Advocacy Day held in February in Jefferson City. Weaver and Jon Korte also accepted legislative resolutions from the Missouri House and Senate recognizing the firm’s contributions to the economy of mid-Missouri. The events were sponsored by the BDP.

Bateson introduced WMI to Scheve and the TAAC program.

Bateson had performed a market survey zeroing in on specific industries and businesses. This study thoroughly researched the Midwest, its businesses and their size and products that could be a good fit. After being accepted into the TAAC program, WMI used some grant funds for a gap analysis by BDP partner and manufacturing experts Missouri Enterprise, whose staff helped catalog the firm’s strengths and weaknesses and how address both.

Sales was a glaring candidate. As a small company with limited staff, Weaver couldn’t afford a sales and marketing person. And Weaver had reservations about a contracted sales agent. Having spent time as a manager of commissioned sales agents and a former commissioned sales agent himself, Bateson had a different perspective. He explained to Weaver that commissioned agents take all the risk and expense and only get paid when they sell something.

So far, these two individuals have found good opportunities for WMI. These agents already represented companies in plastics, molding, stamping, metalwork, electronics and other industries, many of which could use WMI’s services.

Even with all this expert help, isn’t it getting harder to stay afloat in today’s race-to-the-bottom-cost global economy? 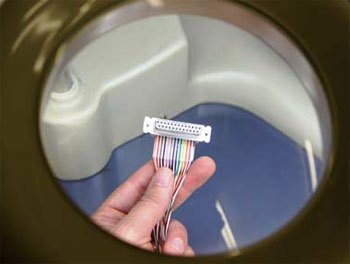 All WMI parts, such as ribbon cables and connectors, are carefully inspected before packaging and shipping.

“Oh yes, the chase for least-cost labor has affected us greatly,” said Weaver. “We do not have a product of our own. We are a domestic assembler and manufacturer of other companies’ products. We have to keep our costs low, of course — nothing dynamic about that. Every company looks to keep costs low, but we must be very mindful of labor costs, efficiencies, safety and quality.

“But our main customers, past and present, are large global companies, so they are well-integrated into manufacturing facilities worldwide. We have just been fortunate enough to continue to have these companies bring their products to us for their labor intensive assembly needs.”

Weaver also says that business does not just land in his lap, but he is optimistic about WMI’s next 30 years.

“What is ahead is to continue to use the good people we have met [like Bateson, Leonard and Scheve] and be hopeful and enthusiastic for good things ahead.

“It’s healthier to view the future in a hopeful and optimistic way.”

What is contract manufacturing?

A contract manufacturer manufactures or assembles components or products for other firms. In the case of Weaver Manufacturing Inc., that’s components of 3M disposable respirator masks and other products, using state of the art ultrasonic welding and other techniques. WMI also inspects microcircuitry and ribbon cables.