Toggle Side Menu In this section 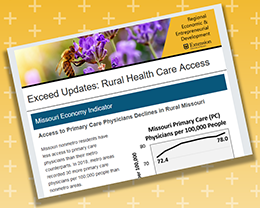 In January 2022, long COVID accounted for approximately 15% of the 10.6 million unfilled U.S. jobs. Of Missourians who previously had COVID-19, 37.4% reported symptoms lasting three months or longer — compared with 33.2% of all Americans. Of working Missourians, 7.5% need paid sick leave, and 5.9% need paid family leave. Employees younger than 30 and those who work for firms with fewer than 50 employees tend to have a greater need for paid sick leave and paid family leave.

In 2020, 147,307 farmers nationwide produced and sold $9 billion of local food — a 3% increase in total sales from 2015. Of these sales, 33% originated from direct-to-consumer transactions, 21% from retailers and 46% from institutions and intermediaries. The majority (57%) of U.S. farms marketing local food directly to consumers operated in metropolitan counties. Roughly four in five farms making direct sales sold all their food within 100 miles of their farms.